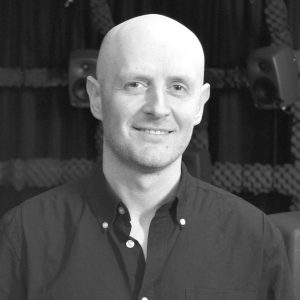 Gavin Kearney graduated from Dublin Institute of Technology in 2002 with an honors degree in Electronic Engineering and has since obtained both MSc and PhD degrees in Audio Signal Processing from Trinity College Dublin. During this time he worked (and continues to) in the audio industry as sound engineer and producer. He first joined the University of York as a Lecturer in Sound Design at the Department of Theatre, Film and Television in January 2011 and has since been appointed as Associate Professor in Audio and Music Technology at the Department of Electronic Engineering. He is vice-chair of the AES Audio for Games Technical Committee and leads the ‘Audio for New Realities’ subgroup. He leads a research team within the AudioLab which focuses on different facets of immersive and interactive audio, including spatial audio and surround sound, real-time audio signal processing, Ambisonics and spherical acoustics, game audio / audio for virtual and augmented reality and recording and audio post-production technique development.

“A Perceptual Evaluation of Individual and Non-Individual HRTFs : a case study of the SADIE II database” – Calum Armstrong, Damian Murphy and Gavin Kearney